I’ve periodically asked God various questions about angels (why don’t they have wives?), evil spirits (are they all fallen angels as I’ve been taught?; are some of them ghosts?; do ghosts really exist?), and the Nephilim or children of Anak (can You explain this to me more?). A couple of days ago, I felt led in my spirit to read the Book of Enoch. Enoch was the father of Methuselah and grandfather of Noah. Enoch walked so closely with God that he never died but, like Elijah, was translated directly to heaven. (Genesis 5:24.) What I read was a paradigm shift for some of my beliefs. Was this really from God?

The next morning, I received confirmation. Without knowing about my reading, a prophetic friend (Nicole Moore) recommended that I search for Lancaster Prophetic Conference 2015. I then watched Neville Johnson speaking in Session 1 at https://www.youtube.com/watch?v=aNiuaZbKGsU. His quote above and other references here are from that video.

Evil spirits are not, as I used to believe, fallen angels. Rather, they are the spirits of the Nephilim. When the Nephilim were killed, their spirits were condemned to stay on earth.

The Book of Enoch is part of the Apocrypha, inspired ancient writings that were individually either not made as or not kept as books of the Bible. Enoch 15:1 – 16:1 {with my explanatory comments in curly brackets} is part of a prophetic dream given to Enoch:

“15:1 And He answered and said to me, and I heard His voice: ‘Fear not, Enoch, thou righteous man and scribe of righteousness: approach hither {here} and hear My voice.

“ ‘2 And go, say to the Watchers of heaven {fallen angels}, who have sent thee to intercede for them: “You should intercede for men, and not men for you:

“ ‘3 Wherefore {why} have ye left the high, holy, and eternal heaven, and lain with women, and defiled yourselves with the daughters of men and taken to yourselves wives, and done like the children of earth, and begotten giants (as your) sons?

“ ‘4 And though ye were holy, spiritual, living the eternal life, you have defiled yourselves with the blood of women, and have begotten (children) with the blood of flesh, and, as the children of men, have lusted after flesh and blood as those also do who die and perish.

“ ‘5 Therefore have I given them {men} wives also that they might impregnate them, and beget children by them, that thus nothing might be wanting to them on earth.

“ ‘6 But you {fallen angels} were formerly spiritual, living the eternal life, and immortal for all generations of the world.

“ ‘7 And therefore I have not appointed wives for you; for as for the spiritual ones of the heaven {angels}, in heaven is their dwelling.

“ ‘8 And now, the giants {Nephilim}, who are produced from the spirits {fallen angels} and flesh, shall be called evil spirits upon the earth, and on the earth shall be their dwelling.

“ ‘9 Evil spirits have proceeded from their bodies; because they are born from men, and from the holy Watchers is their beginning and primal origin; they shall be evil spirits on earth, and evil spirits shall they be called.’

“11 And the spirits of the giants {evil spirits} afflict, oppress, destroy, attack, do battle, and work destruction on the earth, and cause trouble: they take no food, but nevertheless hunger and thirst, and cause offences. And these spirits shall rise up against the children of men and against the women, because they have proceeded from them.

“16:1 From the days of the slaughter and destruction and death of the giants, from the souls of whose flesh the spirits, having gone forth, shall destroy without incurring judgement – thus shall they destroy until the day of the consummation, the great judgement in which the age shall be consummated, over the Watchers and the godless, yea, shall be wholly consummated.”

Did you see the answers to my questions?

While reminding the audience of the story of Noah, and God destroying the entire human race except for one family, Neville talks about Nephilim, the giants in the Bible, offspring of fallen angels and human women. At 55:50 minutes he begins to relate the story of an American Special Forces group on a mission in the mountains of Afghanistan when they began to be attacked by someone throwing huge boulders down at them. They responded to the attack and killed him. 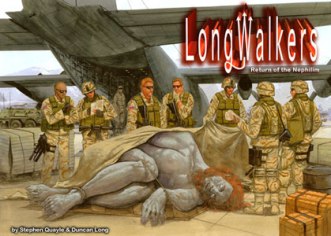 When they climbed up closer to him, they were amazed at what they saw:  a literal giant, apparently nearly three times their height, with six fingers on each hand and six toes on each foot. The picture of him tied up for transport at the air strip and with soldiers standing behind him, is at 56:45. In this picture, which looks like an artist’s rendering, the giant has grey skin. There is no description given of the giant while alive; I don’t know if his skin was always grey or it turned grey after death.

Remember all those people who came forward over the last several decades to say they had been abducted by aliens and were subjected to medical tests and experimentation? Looks like the only thing wrong with their story was the “aliens from outer space” part. No aliens, these were evil spirits manifesting as aliens. The people were deceived.

The point is that this age of lawlessness will be significantly worse than most of us had probably previously thought about. The evil spirits have managed to reproduce their giant offspring again. And with cloning now available, we could see entire armies of giants. BUT this age will also be significantly better than most of us had thought. Light overpowers darkness! Yes, evil is rising. Yes, we will see evil spirits. Yes, we may face evil giants. But also yes, we will see angels fighting on our behalf!

Do not be like the ten spies who blasphemously prophesied that they could not prevail against the giants in the land! Be like Joshua and Caleb, the two spies who knew the truth – that with God fighting for them, of course they could overcome the giants! But because the people believed the ten and not the two, they wandered in the wilderness for 40 years and died. (Numbers 13-14.)

We are in a battle for our minds. It is the battle of unbelief, which is the wind now blowing for ill across the churches. Listen to the Voice of the Lord! If we lose this battle, we will fall victim to demonic mind control. Trust God and obey Him. If you don’t easily hear the Voice of the Lord, pray and ask God to teach you His Voice now!

How are we to overcome giants and such evil? See my earlier post, Wave upon Wave. Neville says that this is the year! This year in the Feast of Tabernacles/Booths/Sukkot, seven days beginning sundown September 27, 2015,  the Jewish Appointed Time that celebrates God lives with us, God is releasing “a new Grace” to His people. In addition to undeserved blessing, God’s Grace is power (2 Corinthians 12:7-10). The Waves begin. Are you swimming?

2 thoughts on “The Nephilim Are Here. Again.”